Working with professionals – Trip through the Andes

It has been a real pleasure recently, to manage the travel logistics for a film maker working in Bolivia following the transportation of some massive trucks carrying very heavy gas turbines which will eventually power many Bolivian homes. The trucks were so massive and so heavy that literally every bridge and mountain pass had to be measured in order to accommodate the trucks and to make sure that they had not damaged the roads and bridges for other vehicles. A drop of more than 4 mm to a bridge would result in having to rebuild the bridge which would mean closing the only real road between two cities. 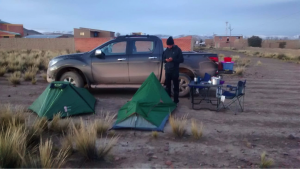 vAMMos were tasked with collecting the photographer and working with him to get into position for the best shots. This meant moving around the convoy and getting to know the routine that the drivers used as well as integrating with what was going on.

In the evenings we had to work out where to pitch tents as we were mainly parked up at the side of the road which wasn’t suitable for a sound night’s sleep. We managed to find some good spots including a church ground, a football pitch, a waterfall (we couldn’t resist this) and several sheltered roadside spots with some amazing views. The main considerations were safety, level ground, a quiet spot if possible and of getting out of the cold. We were at over 4,000 metres and camping in snow for part of the trip. 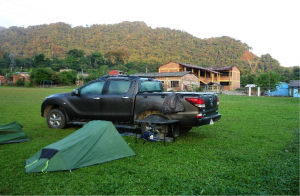 Football pitch negotiated as a campsite after speaking to many town officials. It appeared quite a big decision to make, but everyone was nice and they agreed in the end.

There were a few street dogs to consider but in the main they were really friendly and just a bit noisy at times. Meals were simple but adequate and vAMMos set up camp, shopped for the food and cooked as well. This allowed our photographer to get on with filming and interviews without worrying about all the trivial aspects of setting up camp.

Cute street dogs at one of our ad-hoc camp sites ?

So how did we do? Well bearing in mind that this was a photographer who has worked for National Geographic, Discovery Channel, NBC, Washington Post and many more, quite well it seems! We were delighted to be booked for a follow up week and to have some very encouraging feedback to share with you all. 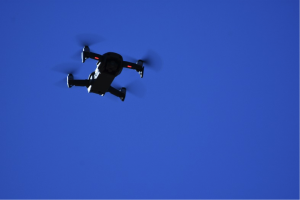 vAMMos look forward to working with many more photographers and film crews over the coming months and years. 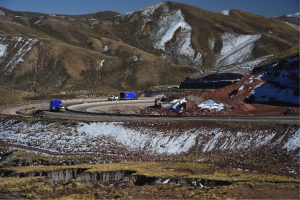